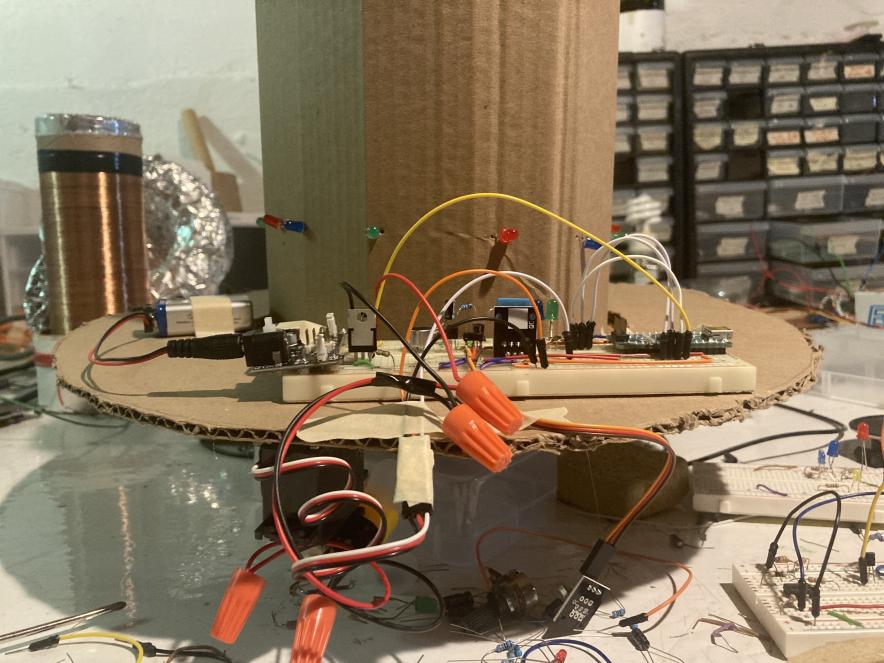 The project is all about chilling out when you are feeling hot, or want some relaxation. Our project will let you have a lot of fun. #Arduino #Hardware #Coolinator3000 #Chill #Goodlife #Tech #UMass

When we met as a team. We were brainstorming about what to make. And after a lot of discussions, one of our teammates came with the idea of making something from a Hat using Arduino and other stuff. So we thought that we could add more things to it and make it better and interesting so people can have fun and even can chill out with our project. We thought of google things and see what more we can add to it so that our project becomes easier and beginner-friendly.

How we built it:

The project is a top hat that consists of a servo mounted fan and LEDs. We came up with the project idea organically while brainstorming as a team--someone mentioned the idea of a hat and then another person suggested putting a propeller on it and we just thought of the most wacky hat possible

Challenges we ran into:

The challenges we faced were, that we didn't have all the components we needed but still we made a project using components we had. Two of our teammates live in America so we had lots of time Standard problem, but doing hard work we managed to complete it.

that we completed the project on time. and our project is working the way we wanted it to. and We are proud of our project as we made it in really fewer components which is a sign of. Being online and completing Hardware projects is not easy but we made it to work. Two of our teammates live in America so we had lots of time Standard problem, but doing hard work we managed to complete it. So like managing the time was an achievement for us as time doesn't stop for anyone

We learned how to face problems and do not give up at any cost. We also learned about new technologies like AWS, EchoAR, tankard, Polling, and other stuff. It was a really good experience to attend those workshops as they were really well controlled and maintained

So as of now, we don't have any idea. But yes Afterward we will be adding some more components to it so that it looks fancy, light-weighted, more LED lights, some new functionalities, and good to use.

Parts used: ELEGOO kit (mostly for sensors: IR remote and receiver, temperature sensor, and also the fan itself and power supply), Arduino nano as the microcontroller, a MOSFET to control the motor, a microphone and two 2n2222 BJTs for the noise sensor, solderless breadboard, jumper wires, LEDs.